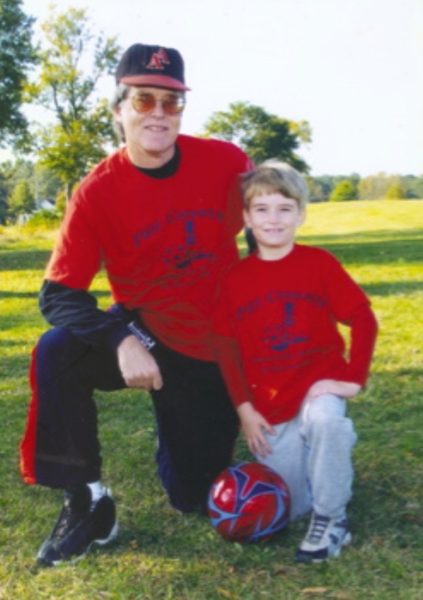 Coach A & Silas • tobacco plant and basket on Eason Street

I’ve lived in Fountain with my wife, Elizabeth, and our son, Silas, since 2001. In May 2018, I retired after 37 years of teaching in ECU’s English department. Elizabeth and I operate Fountain General Store in downtown Fountain. I’m in my third term as a Fountain Town Commissioner, my first as mayor pro tem.

I was born in 1951 and raised in Graham. My father, James A. Albright, served on the Graham City Council for 12 years and my brother, James M. Albright, on that council for 8 years. From Mebane, Dad met and married Ruth Buckner before joining the U.S. Navy after the bombing of Pearl Harbor. My older sister is a retired computer programmer and younger one a recently retired (from University of Nevada, Reno) women’s basketball coach.

I was student body president during the first year of complete integration at Graham High School, where I was also an all-conference tennis player and honorable mention all-conference basketball player, a top-ten senior, and a Morehead Scholarship finalist.

Church
Elizabeth, Silas, and I are members of Fountain Presbyterian Church, where I also serve as an elder and chair of our building and grounds committee.

Business background
2004−present
With Elizabeth and sometimes Silas we operate Fountain General Store, in the only two-story building in historic downtown Fountain. Our business hosts occasional music, history, and cultural events and from it we also operate a brick & mortar store, an e.store, a small publishing company, and a book distributorship.