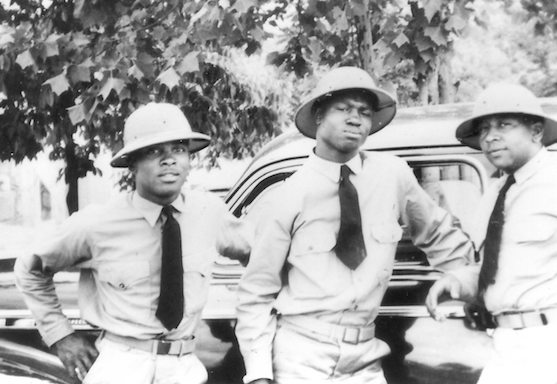 U.S. Navy B-1 was comprised of the first African Americans to serve at rank higher than messman in the modern Navy. B-1 was also the first of over a hundred bands of African-American musicians the Navy used during World War II at postings stateside and in the Pacific.

Formed from a nucleus of North Carolina A&T College students and graduates, the band was comprised of “the best, most talented musicians in North Carolina.” Nine students from Greensboro’s Dudley High School also joined, with their parents’ consent, and the Dudley band director, James B. Parsons, became B-1’s bandmaster (though he was never afforded that rank) after A&T’s director, Bernard Mason, was unable to pass the required physical. Bandsmen trained at Norfolk and served at Chapel Hill with the Navy’s pre-flight school from August 1942 to May 1944, when they were transferred to Manana Barracks at Pearl Harbor, the largest posting of African-American servicemen in the world.

In October 1945, the men of B-1 began mustering out, replaced at their Hawaiian barracks by a new band of African Americans that included another North Carolinian, saxophonist John Coltrane.