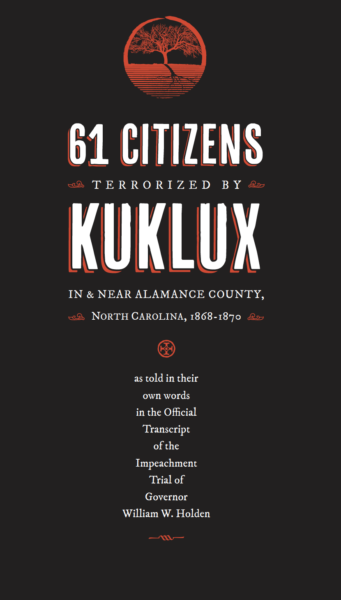 as told in their own words

–this page is under construction–

An Unpleasant & Mostly Forgotten Past Unfolds

The first of eight charges against Governor William W. Holden in his 1871  impeachment trial: he “corruptly and wickedly declared the county of Alamance to be in ‘insurrection.’”

The second charge: he did the same in Caswell County.

They were the fifth and sixth counties to earn this horrific designation, but it was Alamance that seemed always to be the epicenter of trouble. Holden’s impeachment trial would reveal that the Alamance sheriff and all of his deputies–each in charge of a precinct–were Kuklux. Almost a fifth of the 4,000 Kuklux in the state lived in Alamance, even more in Guilford, and several incidents testified to in his impeachment trial indicated nightriders had come out of Guilford to stage raids in Alamance, where it was so easy to get away with, literally, murder: Holden counts six Kuklux murders in Alamance, two in Caswell, and more than a hundred taken from their home and “scourged” because of their race or political opinions, during the reign of terror.

Holden became governor twice in less than six tumultuous years before his impeachment and removal from office in March 1871. He was appointed provisional governor in May 1865 by President Johnson, then defeated in the first post-Civil War election by Jonathan Worth. In 1868 as the Reconstruction Acts restructured the state’s government in preparation of its return to the Union, Holden was elected in a landslide, with extensive support from African American voters. Worth, who especially resisted the idea of Negro suffrage that the Reconstruction Acts guaranteed, at first refused to leave office, then said that he was leaving “under Military duress” and “without legality.”

After completing its new constitution in July 1868, North Carolina with Holden as governor was re-admitted to the union; the subsequent removal of military rule ended the protection that local citizens had enjoyed. Within three months of taking office, Holden was hearing of Kuklux violence throughout North Carolina. By that fall, violence and threats had become worrisome enough that Holden issued an executive order intended to protect all voting rights. In November 1868, in a pattern that many whites found alarming, voters in some parts of North Carolina elected candidates who were African American or sympathetic to their rights, and African Americans voted in large numbers. Attacks in those areas, such as Alamance and Caswell counties, increased soon after the election, and by early 1869 they were rampant.

Governor Holden persistently tried to protect citizens from these violent outrages. In April 1869 he issued an executive order prohibiting masked vigilantism and an appeal to all citizens of the state to join him in “discountenancing disorders and violence of all kinds, and in fostering and promoting confidence, peace and good-will among the whole people of the State.” The attacks worsened. In October, he declared Lenoir, Jones, Orange, and Chatham counties to be in surrection. In eighteen months, he issued four proclamations, wrote to members of Congress and President Grant and to U.S. military officers asking for assistance with controlling the Kuklux, and authorized sending military officers and detectives into the afflicted areas to file detailed field reports. Finally he asked the legislature for the right to call a county in “insurrection” and to protect its citizens with state’s military rule, and on January 29, 1870, the Shoffner Act gave him that power.

The act’s author, Senator T.M. Shoffner of Alamance County, subsequently fled for his safety, leaving Holden short another of his political supporters.

Meanwhile, the violent assaults continued. Wyatt Outlaw’s murder at Graham, on February 26, 1870, finally brought Holden to declare, on March 7, 1870, Alamance in to also be in state of insurrection, but it was July before the militia, led by the former Union guerilla leader George W. Kirk, restored safety to the areas. The Kirk-Holden War commenced on July 15, when Kirk began directing the arrest of local white men for, among other crimes, Outlaw’s murder. Eighty-two were arrested in Alamance, nineteen in Caswell. Complaints over their treatment at the hands of militia would constitute five of the other six impeachment charges against Holden. Holden’s supporters suffered big losses in the August 1870 elections; later that month all those arrested by Kirk were released on judge’s order, effectively ending the “war” although it wasn’t officially terminated until November. Immediately after the election, conservative press began calls for Holden’s impeachment, and after the new legislature was seated, it moved swiftly.

To pay for his defense, by attorneys in-private-practice Richard Badger, Nathanel Boyden, Edward Conigland, J.M. McCorkle, and William N.H. Smith, Holden mortgaged his Raleigh home. The House of Representatives first elected seven managers from among its body to conduct the prosecution, but Thomas Sparrow, appointed chairman of the board of managers, was the only elected official to actively participate in the prosecution. Instead, the state paid for its own high-powered attorneys to prosecute Holden: former governors William A. Graham and Thomas Bragg, who were also former congressmen; and Augustus S. Merrimon, who had been a superior court judge since the end of the Civil War.

The impeachment trial began in the senate chamber in Raleigh on January 23, 1871; on March 22, Holden was acquitted of the two most serious charges, that he had improperly declared insurrections in Alamance and Caswell counties, but convicted on the others, resulting in Tod Caldwell becoming governor and Holden leaving the state. A U.S. Senate committee investigating the reports of race violence in the South used some of the impeachment testimony but also documented extensively instances of similar Kuklux violence throughout the region. It also concluded in March 1871 that there were no serious problems between the races in the region. By March 1873, all alleged participants in vigilante assaults in North Carolina were pardoned and given amnesty from future prosecution. The Compromise of 1877 gave Rutherford B. Hayes the U.S.presidency, formally ended Reconstruction, and recognized “home- rule,” or the individual states’ rights to control their African-American population, with that power according to North Carolina’s constitution generally enforced by county sheriffs.

Holden then authored his defense, which the state published as a 46-page document, before the trial commenced.

The 2nd in the trilogy of the official impeachment documents, about 1500 pages, contains the bulk of the trial transcript, including the testimonies most relevant to the activities of Kuklux that resulted in the counties of Alamance and Caswell being declared in insurrection. This is the document from which the testimonies included in 61 Citizens is taken. It ends with day 36 of the 42 day trial and as the prosecution claims to be at the end of its presentations. 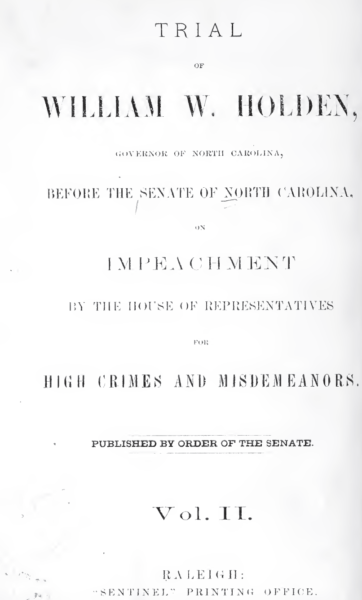