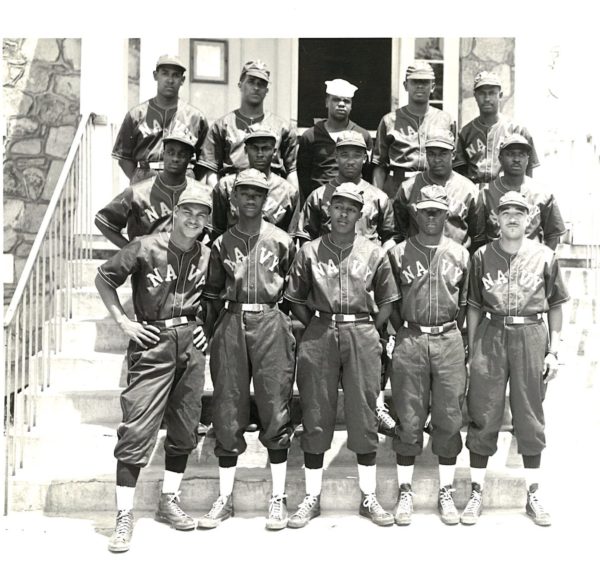 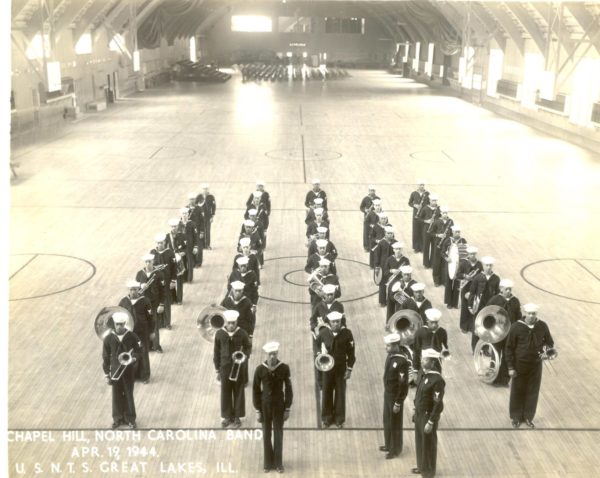 The band at Great Lakes, shortly before assignment to replace B-1 at Chapel Hill. Courtesy of David Martin Brown & US Navy Band Archives.

B-1 bandsmen didn’t find out they were being transferred to Pearl Harbor until their replacements, who had been trained at Camp Robert Smalls, arrived during the third week of April 1944. The new bandsmen came from “widely separated places,” the pre-flight school’s newspaper Cloudbuster reported.

Locals recall that the new bandsmen were different from B-1: older, and unused to the Jim Crow system that dominated Chapel Hill. Unlike the B-1 bandsmen, who for the most part spent their leisure hours in and near their Hargraves Center barracks, many of the replacement bandsmen enjoyed visits to Durham’s Hayti community, for its nightlife. And some of these bandsmen were seen with white girls coming home from a Sunday afternoon picnic in July 1944 at Battle Park organized by the “Snuffbuckets,” a group of UNC students associated with Rev. Charles Jones’ Chapel Hill Presbyterian Church. The picnic group also included three students from North Carolina College in Durham (a blacks-only college now known as North Carolina Central University): two black women and one black man.

Chapel Hill police reported the event, and the local community’s outrage over it, to an F.B.I. informant, which prompted the War Department to prepare its confidential memo “Commingling of Whites and Negroes at Chapel Hill, N.C.” The police reports were “inaccurate accounts” that made it clear that “police were spreading false rumors about [Rev.] Jones and his church,” and insinuated that UNC President Frank Porter Graham and Dean of Students Francis Bradshaw were part of the problem. The “Commingling” report complained that “the coeds and negroes were seen walking side by side on the streets of Chapel Hill on this particular day” and warned that “serious trouble could develop.” Rev. Jones said the complaint should be “dismissed at once.”

Because Chapel Hill police were known to wait for the bandsmen to come back from Durham, some of them invariably intoxicated and thus subject to harassment and arrest, Rev. Jones took to waiting for them at the bus station on weekend nights, so that he could escort them safely back to their barracks. His house was egged, he no doubt faced other threats, and some in the Chapel Hill community still believe his progressive attitudes towards integration cost him his pastorate. He went on to become founding minister for Chapel Hill’s Community Church. 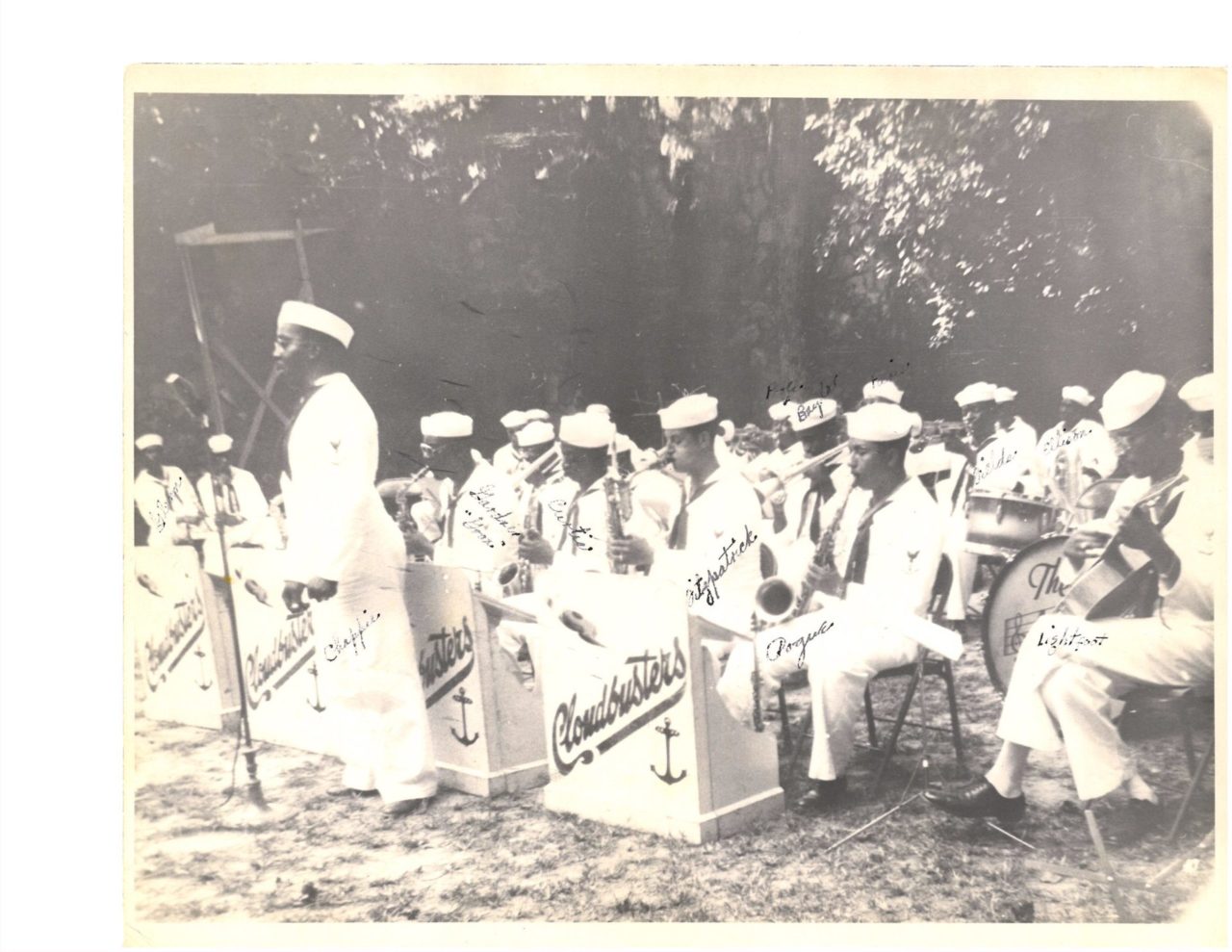 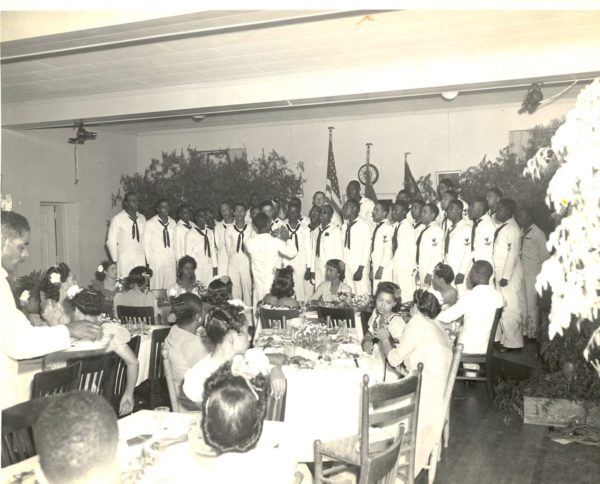 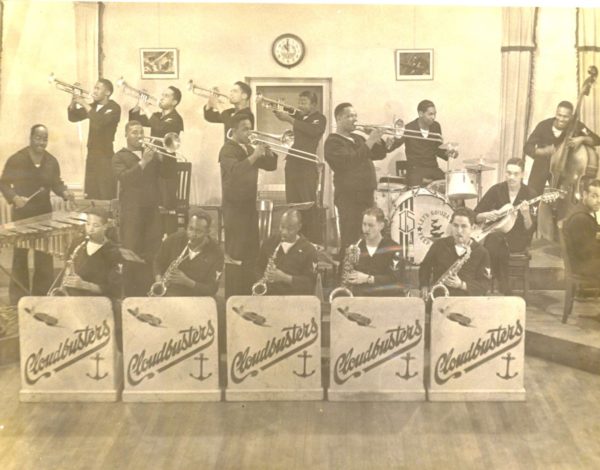 The band’s promotional pose was similar to one used for B-1 dance band of the same name. Courtesy of David Martin Brown & US Navy Band Archives.The replacement band: 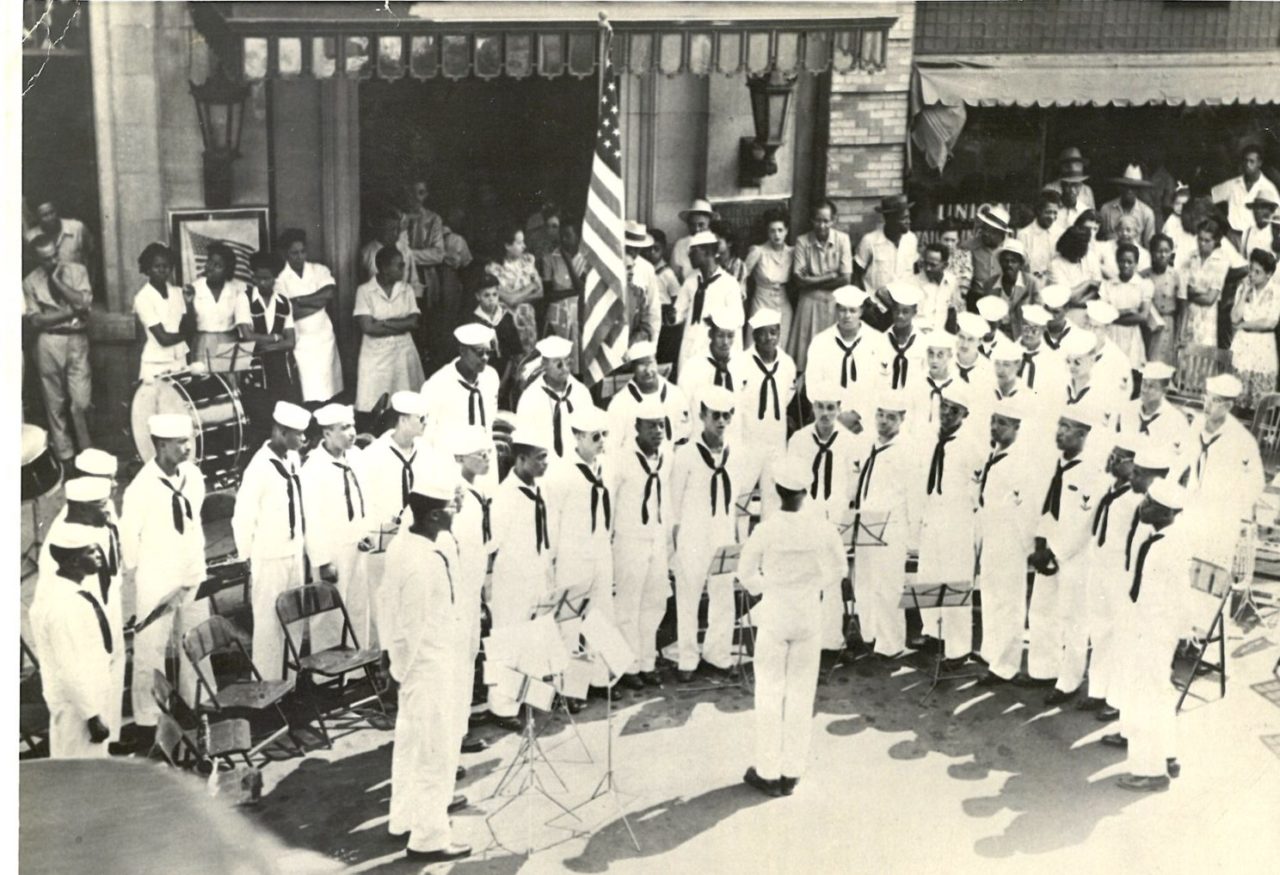 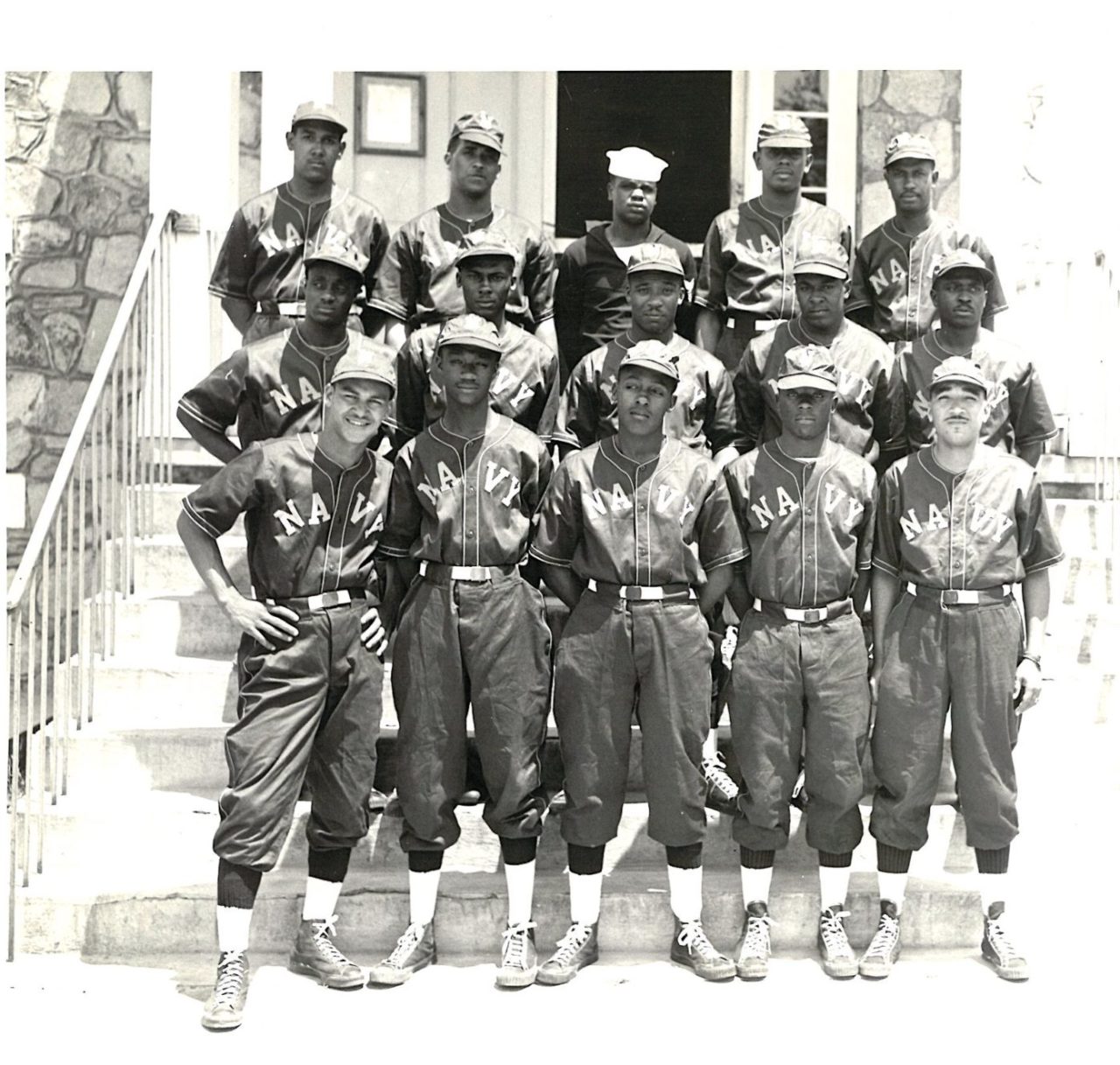 The band’s baseball team, on the steps of their Roberson Street barracks. Courtesy of David Martin Brown & US Navy Band Archives. 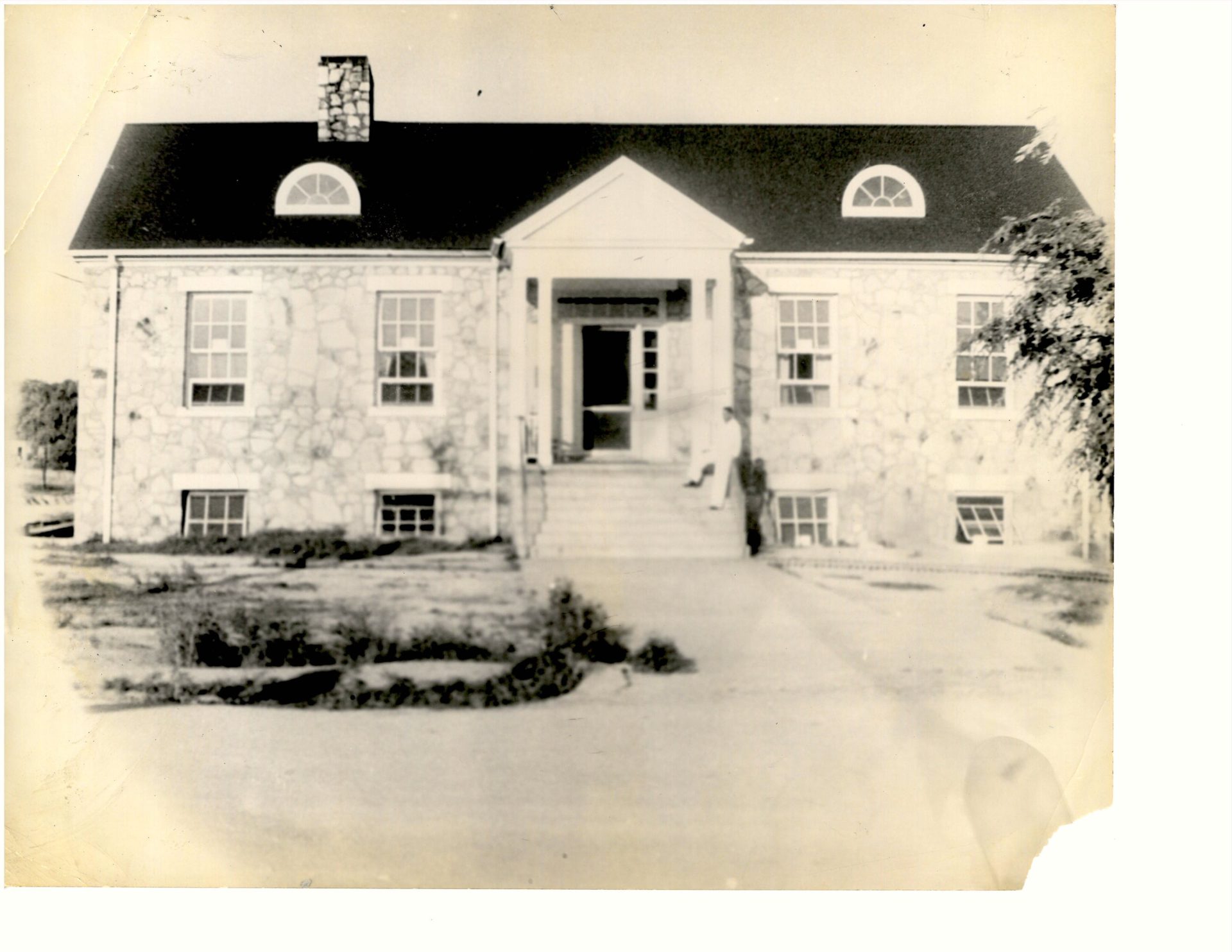