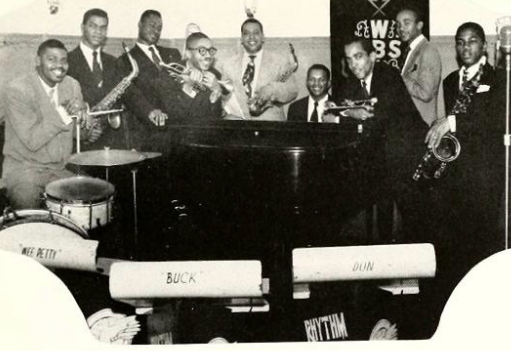 Living in New Orleans changed how I listened to music and tasted food, and I thought I’d gotten pretty smart when I said to Lou Donaldson one day in 1987 that my students, mostly freshmen at ECU, didn’t know the difference between blues and jazz. “Well, they’re pretty smart,” he said matter-of-factly.
Donaldson, long-time New York resident, was back in his home state, in Fayetteville for filming of a documentary about “Pitch a Boogie Woogie,” the 1947 musical comedy featurette in which he’d made his professional recording debut. We were shooting him in an occasionally busy lobby of a motor inn on Grove Street and, as coming-and-going guests interrupted our shoot, he kept chuckling about being on Groove Street. Riffing on that, he talked about how easy it was to get stuck in a groove you thought was cool, you got it, unable to escape it, so that you’d be digging your own grave right there on stage. The groove/grave conundrum. Later that night, he’d perform with his quartet at a local club where Thomas Gavin, one of his old pals from a Greensboro-based 1940s dance band, would sit in for a few numbers. But on Grove Street, he was explaining to me how the 12-bar blues progression and his basic jazz form were basically the same–news to me. But Donaldson, Gavin, and the other members of the Rhythm Vets had been upgrading the musical education that I’d started getting in New Orleans, where I had moved not long after Professor Longhair died, in 1980, and about the time that WWOZ signed on the air. I lived for a year on the Esplanade end of Bourbon Street, near Cosimo’s (the bar), Buster Holmes’, Sweet Willie’s, the Port o’ Call, Molly’s at the Market, and the Verti Marte, all good spots for food and drink, but Snug Harbor and the Dream Palace were the best for musical adventures. Ellis Marsailis, Jr. played regularly, for free, sometimes solo but often with some of his kids or any of a host of talented locals at Snug Harbor, and the Dream Palace, with its 12′ gator behind the bar, was often jumping late with the Neville Brothers, the Radiators or the Subdudes. My friend Steve Smith, who with wife Phyllis had taken me in for the few weeks it took to find a job (teaching English and U.S. history at Chalmette High School) and that Bourbon Street shotgun apartment, introduced me to James Booker, then playing, also for free, as the lounge act prior to performances of Ain’t Misbehavin’ at Le Petit Theatre on St. Peter St. We spent several excellent happy hours there before showtime, standing a couple of feet from Booker, bought him drinks that he’d set on his piano, and sometimes caught him at the Maple Leaf, where I’d also go on Sundays to wash clothes and listen to poems–regular readings there organized by Everette Maddox.
After New Orleans, back in NC by August 1981, I gave up fast food and listening to pop music, even though I had felt sort of like the pop I listened to was better than what most Americans heard on their radios: alternative rock, say, compared to country or pop. I hadn’t really known how dense the deeper worlds of music ran, how fascinating their stories were and how pleasing and original their sounds, until that year in New Orleans.
But writing about all that seemed another story indeed. Just the idea of New Orleans music seemed as dense and foreboding as going into English with an idea to write about Shakespeare, where you’d have to be familiar not only with all that he wrote but also all that anyone had written about him on whatever subject you chose to address–far too much to ever imagine getting through. My little contribution to that larger New Orleans music story so far has been the construction of histories of the two black Navy bands that worked bases there during World War II, in one of which Lou Donaldson served for the last year of the war.
The doors began opening  while I was researching “Pitch a Boogie Woogie” and the world behind the veil I found there, and it somehow makes perfect sense that finding the New Orleans-sounding band the Lemon Sisters and Rutabaga Brothers in Greenville–the band’s founder, Mike Hamer had moved to there from New Orleans–would lead me to the reggae singer Bill Shepherd, who’d show me his nitrate reels of “Pitch,” which would lead me to the Rhythm Vets (and Donaldson and black tented vaudeville and black cast film made for black audiences only), and they to B-1 (and dozens of interviews in the homes of kind men and women who might just as well have kept closed the door between them and a stranger asking questions about their long ago lives) and it to black Navy bands (and bop) being explained to me in a lobby in Fayetteville. And so on. . .
Today, thanks to the wonders of the internet and Bluetooth, I still listen to WWOZ (from Fountain, or wherever I travel), the best radio station in the universe and a persistent and vigilant teacher.

book
The Forgotten First: B-1 and the Integration of the Modern Navy. Fountain, NC: R.A. Fountain, 2013.