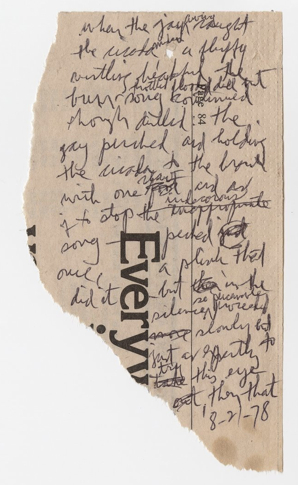 I was fortunate during my academic career to not have a literary specialty; instead, as a creative nonfiction professor, I was given fair credit for articles and essays published on a variety of subjects.

Those literary interests often also involved music and vernacular cultures, especially Southern ones: an interest in Kerouac leads to jazz and African-American culture, and to Archie Ammons’ scroll poems and East Carolina roots, his Southernness, a thing that also fascinated Kerouac, and to black writers as different as Ishmael Reed and Langston Hughes.

Living in New Orleans, 1980-81, helped get rid of fast food and pop music. Since then I’ve had the great good luck to live in a region with a deep and rich history, to have found several stories within that history worth telling, and to have enjoyed both the research and the fruition of it. Without that year in New Orleans, most of it spent living on the Esplanade end of Bourbon St., I’m not sure I’d have noticed much of it.

Editing the North Carolina Literary Review afforded me a staff of smart folks: Bertie Fearing, John Patterson, Jane Ashford, Tim Hampton, Trish Evans and many others who’d gladly research contexts and backgrounds for our issues–and fact check!–railroad edit, and working with such brilliant designers as Eva Roberts and Stanton Blakeslee showed how much fun it could be to make footnotes matter.

Archie wrote “Sight Seed” on this scrap of paper:

when the jay caught
the cicada, midair, a fluffy,
rustling beakful, the
burr-song flooded dull but .. .

Langston Hughes was living incognito in a Reno boarding house for a few weeks in 1934 when he wrote to his patron, Noel Sullivan.