I’ve also presented a couple of papers for gatherings of Green and Southern lit audiences: in New Orleans, on Green’s neglected place in the pantheon of World War I poets, and in Chapel Hill for those gathered to watch the staging of Green’s play Johnny Johnson.

Roper’s editing of the Green poems, introduced by his biographical notes, make this an important book that should have gotten much more attention than it did when originally published. Green rightfully belongs at the forefront of the much better known English language poets of World War I, a list headed by Robert Graves, Wilfrid Owen, Siegfried Sassoon, Rupert Brooke, and Rudyard Kipling, all English poets, and e.e. cummings, the sole American that’s most often included in this canon. (Joyce Kilmer qualifies more for his tragic death in battle than for his poems.) 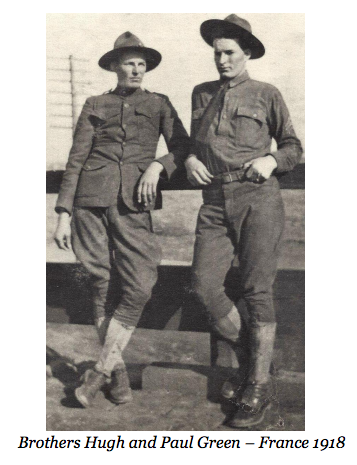 The Paul Green Foundation produced a choral in four parts based on these poems, “Songs of War,” which premiered at UNC-CH on November 23, 2019. Kenneth Frazelle was commissioned to write the musical parts – soprano, alto, tenor and bass.

Green’s poems combined with his recently resurrected anti-war play Johnny Johnson: the Biography of a Common Man (originally produced on Broadway by the Group Theatre in 1936 with music by Kurt Weil) make him one of the most important American writers commenting on this awful subject.

At one point, NCLR was preparing to re-print most of Green’s World War I diary, which is housed at UNC-CH’s Southern Historical Collection.