At Carolina in the late 1960s /early 1970s, I was much more interested in Kerouac, William Burroughs, Richard Brautigan and Kurt Vonnegut than Melville, Emerson, Thoreau, and Hawthorne.  I’m still a little embarrassed to recall that, when Walter Spearman had us announce in a book reviewing class one day what our favorite book of all time was, I said Brautigan’s The Abortion.
As I re-read in the early 1980s the canonical American lit authors in preparation for “teaching” them at ECU, I realized that being 18 or 19 might not be the best ages for reading such texts. And, once I slowed my pace and read more for style than plot, I became an ardent proponent of most of those early Americans (Hawthorne excepted!): “Bartleby, the Scrivener” and “Self-Reliance” became two of my “all time favorites.”
In that long process, I also went from being a Kerouac fan to an admirer (and defender) of his talents.
One of my favorite unfinished projects has been a collection that Terry Smith at North Carolina Wesleyan College Press intended to publish: Kerouac in Carolina, which would have collected excerpts from Kerouac’s published prose set in North Carolina and from the many letters he wrote from the three area homes he shared with his mother; sister, Nin, and her husband, Paul; and their infant son, Paul, Jr. Questions about rights and permissions doomed that project, but before it fell apart, I had a lot of fun tracking down those letters, especially, from their various archival homes.

award
1991 Jack Kerouac Literary Prize, presented by the Lowell, Mass. Historic Preservation Commission, for Kerouac scholarship, for unpublished essay “Race, the Canon, and Kerouac”
–The award included an honorarium and expenses to Lowell for a public reading and reception that also featured Ray Manzarek, the keyboardist who, with Jim Morrison, co-founded the Doors.

“Before He Went West, He Had to Go South: Kerouac’s Southern Aesthetics. North Carolina Humanities. Spring 1993: 53-70.
NCH, another short-lived publication, omitted the key phrase “the South” from my thesis sentence, the last one in the first paragraph: “But in Road, Kerouac’s literary Everyman, Jack Dulouz, must first explore the South before he can consider the western possibilities.” 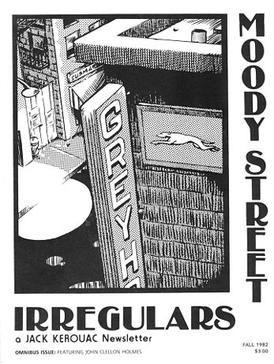