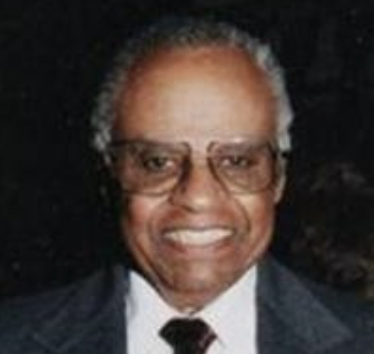 Harry Noble Simms, 97, passed away on Friday, May 4, 2012, at the Vermont Veteran Home, Bennington, Vt. Noble was the eldest of 4 children of the late Harry and Alberta Simms of Snow Hill, Alabama. Noble was a long time resident of Schenectady, New York and a member of the Friendship Baptist Church. Prior to moving to New York State, Noble attended school in the state of Alabama and was a graduate of Tuskegee University.

While a student at Tuskegee, Noble managed the family business, Simms Sassafras Tea Company. He also operated his own hand-made souvenir business. Noble served in the U.S. Navy during WWII, as the founder and director of the school of music for Black service men at the Great Lakes Naval Training Center, Great Lakes, Ill. While there he supervised the training of over 100 band units, which entertained naval personnel worldwide.

Noble was also a graduate of New York University, where he was elected vice president of the 14,000 graduate students organization and earned the Masters of Arts Degree in Administration. He served in many instructional and administrative positions in the NYC public school system.

Noble was appointed to the late Governor Rockefeller’s administration as a staff member, and served as Education Specialist for New York State Office of Economic Opportunity, where he provided technical assistance to the Title I and community agencies offering educational programs.

He served in various organizations as a member of the board of directors such as, Vice President of New York University School of Education Alumni Association; the New York State Senate Task Force of Critical Problems; Board Member of the Albany Symphony Orchestra; Consultant to the American Symphony Orchestra League; New York Board of Examiners; Department of Civil Service; Consultant to the Long Island and Westchester Counties National Conference of Christians and Jews; Associate in the Bureau of Continuing Education and as Assistant in the Bureau of Grant Management and Compliance; New York Department of Education; Editorial Advisory Board of the Black American Veteran Magazine. Noble was the founder and CEO of “Outreach” a Promotional Firm Inc. He was member of the Albany/Colonie Chamber of Commerce, and a member of Sigma Pi Phi fraternity, “The Boule”, the oldest black professional fraternity in America. In 2008 Noble was inducted into the Alabama Jazz Hall of Fame for the exceptional furtherance of Jazz.

Service will be held Saturday, May 12 at Friendship Baptist Church, Schenectady. Viewing at 10am , services begin at 11am. In lieu of flowers, donations may be made to: Beta Psi Boule’ Foundation, PO Box 1063, Guilderland, NY 12084.

BENNINGTON — H. Noble Simms slowly but surely makes his way, under his own power, to the piano in the corner of the lobby. He takes a seat on the bench, spins around, and places his right foot on a peddle and his hands on the keys. Simms’ long, slender fingers dance on the keys, as his 94-year-old mind and body play intricate songs from memory, without missing a single note or beat. He finishes “Blue Moon” a few moments later and turns his head toward his small audience, offering a wide grin. He is clearly pleased with himself.

Simms has much to be pleased with. He has been a musician, businessman, author, educator, cancer and stroke survivor, and more. And he’s not hesitant to tell you all about it.

“I’m Noble Simms, and I have always been somebody,” he recently said at the Vermont Veterans Home, where he now resides. “I did a lot of important things, but I had to work like hell to get there.”

Simms, who will turn 95 in September, speaks softly but with confidence. He grew up in Tuskegee, Ala., and attended the Tuskegee Institute, which later became Tuskegee University. The town is the birthplace of civil rights heroine Rosa Parks, and the institution was home to some of the greatest African American scholars of the 20th century, such as George Washington Carver.

“It was a great way to grow up. You can’t help but see how successful people talked and acted,” Simms said.

Simms’ first love in life was music. Both of his parents were musicians and he naturally followed suit. He said it started with the piano, but he soon picked up the oboe, the clarinet and even the violin for a spell.

“The first thing I ever heard in my life was music. I’ve been exposed to it all my life,” he said.

In 1942, Simms joined the Navy at age 29, and his musical talents were put to use. Stationed at the Great Lakes Naval Station near Chicago, he quickly rose in rank. He became the commanding officer of the School of Music for Black Servicemen. He supervised the training of the black Navy bands that played during World War II. Between 1942 and 1945, more than 5,000 black musicians trained at Great Lakes Naval Station.

Simms, always endeavoring to improve his lot, came up with his own way to recruit musicians, choosing to hit up the newly arriving recruits.

“I’d go and say, ‘Any of you guys play music?’ I’d take their names and have them report to the band station,” Simms said. “If they were no good, I’d send them back to the barracks. If they were good, I’d have their military orders changed.”

His talents were recently honored by the Alabama Jazz Hall of Fame, which inducted Simms earlier this year.

In addition to Simms’ musical talent, he also seems to have been born with an entrepreneurial spirit. He credits his father for his drive to produce things, and of course make a profit. Father and son had so many great ideas it was often hard to know who to give credit to.

“I couldn’t hardly tell what was mine and what was his,” he said. “I just picked it up and ran with it.”

In his unpublished autobiography, “From Roots to Fruits,” Simms details his early efforts to make a buck. He crafted jewelry from the shells of walnuts and lamps from tree stumps. Perhaps his best effort in the 1930s was selling sassafras tea under the Simms’ Sassafras Tea Company label.

After leaving the Navy, Simms enrolled at New York University, saying he used “every last penny” he was entitled to under the GI Bill. He said it was difficult, but he completed his graduate work in education.

“I’m a slow learner, but I was determined that I was going to make myself equal to the challenge of being a student at NYU,” Simms said.

He would go on to work as a public school teacher and principal in New York state before being tapped by former New York Gov. Nelson Rockefeller to work in the Department of Education.

Simms retired in 1978, and about a year later he founded Noble Greeting Cards. Unfortunately, the enterprise never really took off. Simms mortgaged his home and lost most of his money and his wife’s money on the venture. But of course, he never got down on himself. In fact, he put it behind him, and started writing his autobiography, which he hopes will bring back some of the money he lost. He’d give it all to his wife, he said.

“If I could sell the book that would be great. She could have the whole caboodle. I would be justified,” Simms said.

At 94, Simms has no intention of slowing down, and vows to keep working on new projects. He admits that he’s sometimes drawn attention to himself for his own benefit. But, then again, he’s got a lot of interesting stories to tell.

“I did things maybe to show off, but I chose to be me,” he said. “You’re looking at a happy man.”

“I’ve been selfish to the point that I wanted to be a big shot,” Simms said. “I’m on my way. It’s in the process.”

And while other residents at the home may mope about, Simms refuses to.

“Some of these people say they’ve got nothing to do. I’ve got plenty to do. I’m going to work on the computer,” he said. “Life is for those who keep on keepin’ on.”