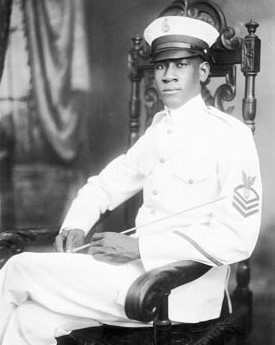 The Guantanamo Bay band is a special mystery. It was one of the first organized in the Navy, and that its bandmaster was the African American Alton Augustus Adams makes it stand apart from any history of musicans and their role in integrating the Navy. Mark Clague describes his role in leading a Navy band of African-American musicians during World War I as “an exceptional situation inspired by exceptional circumstances.” The same held true in World War II. He left the service in 1934 but was called back in early July 1942 to lead a white band stationed at Guantanamo Bay, Cuba. He brought along with him “a number of his former members” of black bands, using “colored musicians along with the white players and the earth continued to revolve on its axis without a jolt.”