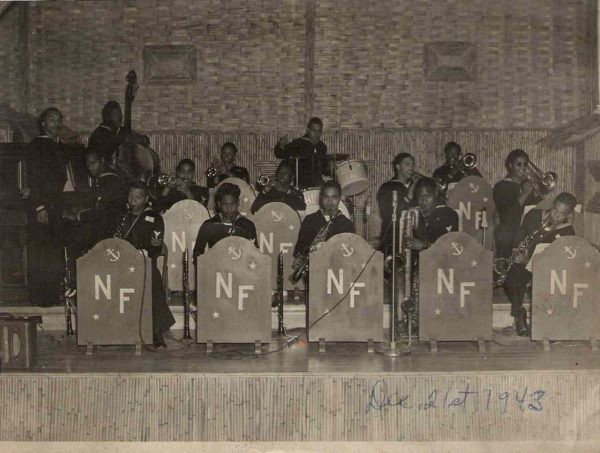 This unknown group was probably an all-star band, too. photo courtesy of Michael Bayes, US Navy archivist, and the U.S. Navy.

Marshal Royal said that no band could compete with his St. Mary’s Preflight School Navy band. Theodore Purnell said that the Navy band he played in with Clyde Kerr in New Orleans was the best he ever played in. One Navy reviewer wrote that Pee Wee Jackson’s Hellcats from the Navy’s Barbers Point station was the best band in the Hawaiian islands. One of B-1’s trumpeters was named “most talented” at Manana Barracks at Pearl Harbor, the largest posting of African-American sailors in the world. The candidates for this fantasy band come from these Navy bands as well as the Great Lakes Radio Band, which was likely as good as they got. Like the times they played in, this fantasy band is segregated, including only African-American musicians. Had any of them been allowed in Ray Anthony’s Navy band at the time, the most popular band in Hawaii–and the house band for eight months in 1945 at the Royal Hawaiian Hotel–he’d have been a good candidate for band leader.

After the war, Ernie Royal became the first to integrate Woody Herman’s band.