Leonard Bowden, one of the leading bandleaders and arrangers in St. Louis in the 1930s, was perhaps the single most important figure in the development of the Navy’s musical talent.

In 1919, he organized one of the earliest sanctioned collegiate jazz ensembles, the Tuskegee Institute’s Syncopated Band. He subsequently taught at Georgia State College, where he started a dance band.

In the late 1920s (one source says 1926, another 1929), he co-founded the Bama State Collegians at Alabama State University with John Tuggle “Fess” Whatley.

Bowden’s bands received frequent notice in the Chicago Defender during the 1930s. Len Bowden & the Melody Masters played for a 1935 Valentine’s dance in Decatur, Illinois. In June, this “brilliant aggregation of St. Louis celebrities” headed South, performing in Memphis, Dallas (at “one of the largest interracial picnics ever held in Dallas”), Palm Beach (at the Sunset Auditorium, “the first social affair of the season,” featuring 23-year-0ld Minnie Pearl), and Savannah. Often referred to as “the old fox,” he was also called “one of the nation’s best known arrangers and teachers of swing music.”

In 1940, he and his Melody Makers took up residency in Nashville, Tennessee, where, the Defender noted in March, “the greatest band in this city’s history has been in secret rehearsal for the past eight weeks.” They made their Nashville debut before 2,500 patrons at the Cotton Club, 2604 Heiman Street, for Omega Psi Phi’s Mardi Gras celebration. Upcoming shows included several Tennessee dates: a Sigma Gamma Rho dance in Jackson; a Kappa’s dance in Nashville; a junior-senior prom dance at Fisk University; and for the Young Men’s Social Club of Clarksville. 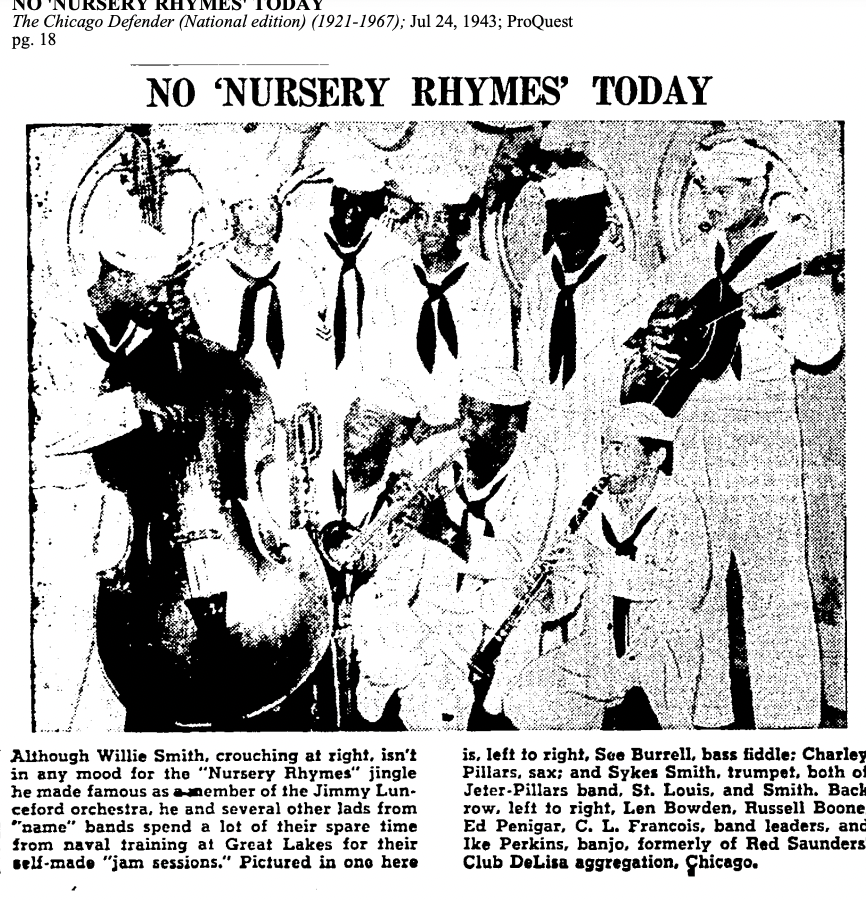 After the war, he taught at Prairie View A&M and Florida A&M universities. Like many Black vets, he was disappointed with the world he found upon his discharge:

With all of my experience, there was no job for me coming out of the Navy, and for-how long were we on the air? Two years? Coming off of that WBBM program, where my name was announced weekly coast-to-coast, there was no job for me. That is right! There was no job that I could get. So, I went in to the post office at night on the four o’clock shift, four to twelve-thirty. After I got set in there–when I went to the Post Office–[guess] where they wanted to put me–immediately! Julius Wright and I went in, just I and Julius; and Julius said, “I don’t want that. Fox, are you going to take it?” “No.” The fact that we were musicians, they felt that we would consent to be a source of supply for the government to check up on the musicians who were transporting dope. I refused to take the job. I needed a job, buying a home in Evanston. So, I asked for any kind of job. So they put me down on the platform handling little bags when the guys brought them in. For four years, I was there. After six months, I went to Chicago Conservatory and signed in. That’s how I got my degree, working in the post office. And after I got my degree, I started teaching.

In 1953, he was hired to arrange and direct a band for a USO show that featured Hardin Simmons’ Cowboy Band, at Hardin-Simmons Universityy in Abileene, Texas.